THE ZIMBABWEAN SITUATION – A NIGHTMARE - by Thabani Muleya -nee- Dube 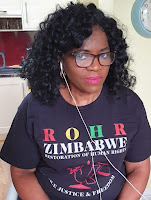 We watch in horror as ordinary people in Zimbabwe are being thrown into prison willy-nilly for exercising their right to freedom of speech, a basic human right, enshrined in the Constitution of  Zimbabwe, The African Charter on Human and People’s Rights (Banjul Charter) and the United Nation’s Universal Declaration of Human Rights.

In its desperation to silence dissent, the regime in Zimbabwe is resorting to “lawfare” instead of addressing the genuine issues being raised by citizens. There is no gainsaying that corruption is rampant in Zimbabwe and the scale increases the higher one is in political office. President of Zimbabwe, Emmerson Mnangagwa, his family, cronies and proxies lead the way in terms of corruption. They engage in corruption in such a brazen manner as to engender a sense of shock among the citizenry.
From another perspective, it is as though they are in some kind of competition.

To make matters worse, the judiciary is now captured to an extent whereby court processes and judgements are at the whims of the President, Emmerson Mnangagwa.

New bespoke “laws”, not backed by statutes are created daily to punish dissent. One such charge is that of “blabbering”.  Invented speculative pieces of  “law” have seen the likes of Hopewell Chin’ono, Job Sikhala, Allan Moyo, Fadzai Mahere and countless others languish in prison for lengthy periods of time.

The scale of incarcerations on trumped up charges is frightening considering that it is only the cases of prominent activists and opposition political figures that get into the news.

At a time when other  governments the world over are depopulating prisons in view of the relentless Covid-19 pandemic, the Zimbabwean government is actually filling up already overpopulated prisons with innocent citizens facing trumped up charges.

This is tantamount to passing death sentences without trial.

One wishes the Zimbabwean situation is just a nightmare from which we shall wake up one day, sweating but unscathed.

About the author;-
Thabani Muleya –nee-Dube is a human rights activist and a member of Restoration of Human Rights (ROHR) Zimbabwe’s UK Chapter. She is based in the United Kingdom and can be contacted by email on tabb2mly@yahoo.co.uk